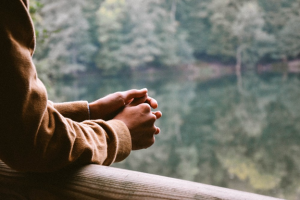 “O Lord, make me know my end and what is the measure of my days; let me know how fleeting I am!  Behold, You have made my days a few handbreadths, and my lifetime is as nothing before You.  Surely all mankind stands as a mere breath! Selah” (Psalm 39:4-5)

When reading from the Book of Psalms or the Book of Habakkuk we often come across an interesting word that is many times overlooked in the public and probably in many private readings.  That word is “Selah.”

There have several meanings attached to this word, but from our perspective, it would seem most appropriate to define it in terms of pausing after reading the text … and to carefully consider the meaning of what was just read or even heard … followed by our offering up our very hearts in praise and thanksgiving to God for the revelation of His great truths!

You see, as the Apostle Paul would later affirm, “All Scripture is given by inspiration of God …” (2 Timothy 3:16) which is to say, All Scripture is “breathed out by God!”  Pause for just a moment and give that some thought.

David, described as “a man after God’s own heart” (1 Samuel 13:14; Acts 13:22) was asking God to help him better understand the value of his time on earth so that he could be all that God wanted him to be! This was a “Selah” moment!

Other than being called “a friend of God” … a term seen only a couple of times in the Bible … this would be such a high and noble compliment to be given to anyone! Wouldn’t each of us love to be identified in such a marvelous way?

David understood the brevity of life … his life … and the lives of every human being on the earth.  It was the realization that his life was always just “a breath” away from being over as far as this world was concerned.  Do we?  And if we do … how are we using these precious moments? Another “Selah” moment!

David understood that life at best was fleeting.  He wanted to know from the Creator how he was to be living the remainder of his life.  You see … we can’t go back in time and change things! Yet, another “Selah” moment!

We are living in a time when recycling various products, containers, etc. is important.  But may we all understand in a very clear way … we cannot go back and recycle wasted or lost time!  You guessed it … another “Selah” moment!

Yes … we are all familiar with the writing of James 4:14, but let’s read it again, “Whereas you do not know what will happen tomorrow.  For what is your life?  It is even a vapor that appears for a little time and then vanishes away.” “Selah”

My friends and brethren … life is so short and eternity is forever!  Why do we somehow think we still have plenty of time to make any changes in character or practice to be more like God wants us to be?  The only one who will actually try and convince you this is true is the one who actually wants to destroy your soul! “Selah”

The thought expressed by David in Psalm 39:5 is actually a very sobering one.  We generally just take for granted that we will see the dawn of a new day!  But the Lord just doesn’t make that kind of a promise to us!  Another “Selah” moment!

Our Creator has set “eternity in each of our hearts” (Ecclesiastes 3:11) and He tells us that we will have to give an accounting to Him who gave us this time! Yes … another “Selah” moment!

C.S. Lewis understood the seriousness of all this when he wrote, “If you read history you will find that the Christians who did the most for the present world were just those who thought most of the next.”

So much more could be said … perhaps in future blogs if the Lord permits.

Here is my question for each one of us to consider thoughtfully, carefully, honestly:  Is your heart … your life … right with God right now?

← Treading Painful Waters …
Open My Eyes, That I May See … →

How Frayed Are The Cords Which Bind Us To This Earth …

“Though one may be overpowered by another, two can withstand him.  And a threefold cord is not quickly broken.”  (Ecclesiastes 4:12, NKJV)  It sits in the drawer of a fancy cherry-stained wooden organizer on my credenza.  It is there every day … and when I open the drawer a smile comes to my face … […]

When She Folded Up The Lawn Chair

“So likewise, whoever of you does not forsake all that he has cannot be My disciple.” (Luke 14:33, NKJV) There are many memories from my growing up on Hill Street in the Northwest portion of Oklahoma City. As young boys, my two brothers and I played the wonderful game of baseball. I still to this […]