Following At A Distance Can Be Costly 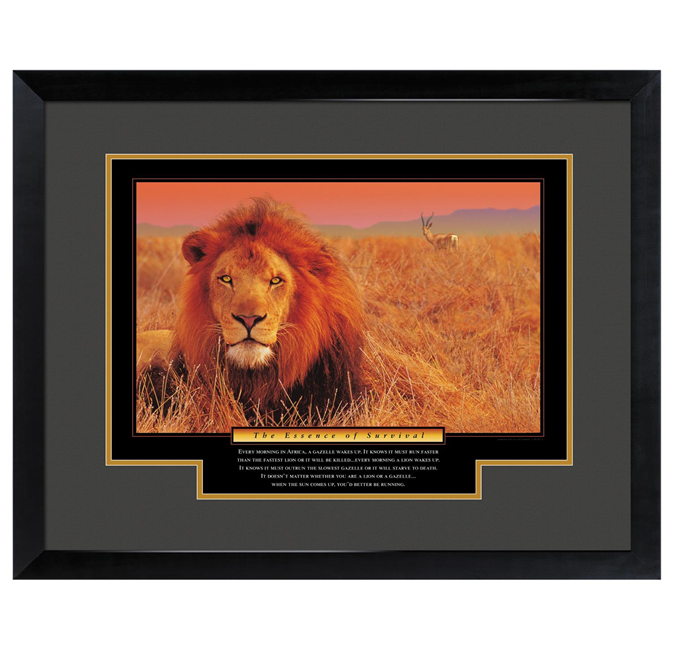 “Remember what Amalek did to you on the way as you were coming out of Egypt, how he met you on the way and attacked your rear ranks, all the stragglers at your rear, when you were tired and weary; and he did not fear God.” (Deuteronomy 25:17-18, NKJV)

A company by the name of Successories, a motivational products company that has been around for some thirty years has one particular framed work entitled, ‘The Essence of Survival.’  It is one of my favorites for a number of reasons and it is the one pictured at the top of this article.

Now, how’s that for some serious motivation!  We’ve probably watched at some time or another the National Geographic Channel where it shows real life drama of predatory animals, reptiles, etc. who patiently wait for their prey to approach … and then attempt to take their life with the intent to eat them.

Admittedly, these can be gruesome documentaries and I must admit that the older I get the harder it is for me to watch any of them!  At any rate, the scenario we’ve just considered happens in real time in so many lives of the unsuspecting in a spiritual way!

God speaking through His spokesman Moses, in giving instructions prior to entering the Promised Land, admonished those listening to remember the treachery and cowardice of the Amalekites as the children of Israel were on their way from leaving Egypt that had occurred with their families.

This was a new generation … but God hadn’t forgotten what the Amalekites had done, nor their evil and wicked ways. He never forgets those sins we choose to not repent of! And when they possessed the Land of Canaan, God’s punishment would be invoked.

Attacking them from the backside of the marching nation … they found easy pickings for those identified as “stragglers” … the weak, the tired and the weary who were struggling to keep up with the rest of the nation.

The Evil One has not changed in his ways and in his efforts to destroy the lives and souls of God’s people!  You and I are no exception!  That is exactly why the apostle Peter by inspiration warned the early Christians who were facing trying and difficult times to “Be sober, be vigilant; because your adversary the devil walks about like a roaring lion, seeking whom he may devour.” (1 Peter 5:8, NKJV)

Yes, we as the people of God are facing hard, pressing, challenging and trying times.  Any sense of normalcy has been placed on hold … we are anxious … we are fearful … we are nervous … and the uncertainty of it all is almost overwhelming!

Evil will always be where mankind lives!  Tragedies are a part of life!  Sickness and death will not end until this world has come to an end!  And Oh won’t it be wonderful there in Heaven, if by God’s good grace and mercy we are able to pass the Judgment and enter through its gates!

But until life shall end as we know it through death … or the Lord by the direction of His Heavenly Father says it is time … as God’s people we must persevere!  We must be diligent in all of our efforts to serve and honor our God!

But as a reminder, among the faithful there will be found those who as the Apostle Paul writes about in 1 Thessalonians 5:14-15, “Now we exhort you, brethren, warn those who are unruly, comfort the fainthearted, uphold the weak, be patient with all.  See that no one renders evil for evil to anyone, but always pursue what is good both for yourselves and for all.”

Not only must we be vigilant in knowing that our enemy, Satan, is lurking in the shadows for his opportunity to stagger and even slay God’s people … we must be watchful for others among our number who might need a little lift … who are exhausted … who are in need of some gentle encouragement … who are following at a distance!

There will always be “stragglers” among us!  And if we are among their number let us have the courage to rise up or ask for others to help us rise up.  Why?  Because we are all in this together and we are not alone, even when Satan whispers over and over that we are!  There have already been too many “stragglers” who have been captured and devoured!  “Be strong and courageous” … not the slow gazelle behind the herd!

P.S. How’s that daily Bible reading and study coming along?

← The Heart of the Matter
When Our Hearts Have Become Broken →