God Will Say When It Is Enough 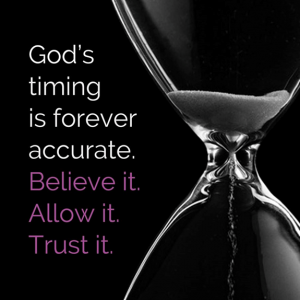 If there is one truth among all the truths that comprise God’s Word … it is the truth that God does things … allows things to transpire … governments to come and go … on His time!

Yes, God does have His own timeline and we cannot … we do not … have the ability to change it … either by speeding it up or by slowing it down!  Throughout the history of this world, God has been in charge … always has been since before the Creation … and will be after this planet is gone!

The longer we live … the deeper our faith and trust in the Lord and in the power of His inspired and revealed Word should be established. The Psalmist writes in Psalm 119:104, “Through Your precepts I get understanding; therefore I hate every false way.”

Our plans often fall short even with the greatest of intent and planning!  Things happen that are setbacks and disappointments to us.  Some of these are greater than others … some are more difficult to face than others … some seem impossible to overcome!

When Jesus was praying to His Father in John 17, we find what could truly be identified as the Lord’s Prayer wherein He spoke with His Father about those who were with Him then and with those who would follow Him later.

Even though Jesus wants all of us to be with Him for eternity in Heaven, He does not ask the Father to go ahead and remove us from all that burdens, discourages, hurts and troubles us!  He just doesn’t do that!

Instead, Jesus leaves us in the Father’s comforting and protecting hands and that should be enough for us!  The very same hands that fashioned this world out of nothing and formed man from the dust of the ground is the very same God who would proclaim to Moses as He was charging him with going back to Egypt to lead the Hebrew nation out of slavery and bondage, “… I AM WHO I AM. And He said, “Thus you shall say to the children of Israel, I AM has sent me to you.”(Exodus 3:14)  We must study His Word to know-how!  Listen to Him!

Each of us has a purpose in this world … we are to honor and glorify our great and loving God … we are to imitate our Savior and Lord … and we are to serve as an example to others including fellow brothers and sisters in Christ and those who live in the world around us!

In God’s own time, it will be your time and mine to leave this world, but until then as Jesus prayed, God is so willing to “… keep us from the evil one.” His protection is coupled with our own diligence to “… make our calling and election sure.”

Live your life down here faithfully as you look forward to “obtaining the crown of righteousness” Paul writes of in 2 Timothy 4:8. And leave it in the Lord’s hands as to when it is time!

“Fight the good fight of faith, lay hold on eternal life, to which you were also called and have confessed the good confession in the presence of many witnesses.”(1Timothy 6:12)

PS:  By the way, how’s your daily Bible reading and meditation coming?

← That Just Doesn’t Make Sense
More Than A Resolution … →

“Now Nadab and Abihu, the sons of Aaron, each took his censer and put fire in it and laid incense on it and offered unauthorized fire before the Lord, which he had not commanded them.  And the fire came out from before the Lord and consumed them, and they died before the Lord.”  (Leviticus 10:1-2, […]

Keeping Your Ear To The Ground

“He, who has ears to hear, let him hear!” (Matthew 13:9, NKJV) As I was growing up in what seems a long, long time ago, one of my favorite TV shows to watch was The Lone Ranger.  He along with this companion, sidekick and scout, Tonto, always seemed to find challenges that others were having, […]