He Wants So Much More Than Respect 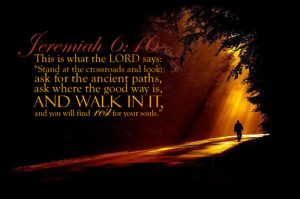 Sometimes, not seeing the need to ask for directions has been attributed to men … especially when they appear to be lost!

I will make an early confession here that as I was growing up, I watched episodes of the great frontiersman and folk hero, Daniel Boone, who was played by Fes Parker.

Daniel Boone was asked if he had ever been lost while out in the wilderness and unknown territory.  His answer reflects how we can rationalize things when he said, “I have never been lost, but I will admit to being confused for several weeks.” Guilty!

Many of us, both men and women, can find ourselves in the unenviable place of being confused, uncertain, having been misdirected, and feeling displaced … and generally just not knowing which way to go or turn.

At other times … the intersection of choosing offers a very clear choice!

Without oversimplifying things, it would do all of us well to remember that the One who created this universe and fashioned our bodies out of the dust of the ground and breathed life into man (Genesis 2:7) … knows exactly where we are … and He has told us exactly how to get to a better place. He has provided all the directions we need.

The better place to be is the one of approval and blessedness … and it is “… the way that leads to eternal life” (John 14:6).

It is thought-provoking to say the least when one takes the witness stand in a court of law with one hand on a Bible and the right hand is raised … and the affirmation of “truth” is made!

In the same way, when a public figure is being ‘sworn in’ to a particular office or position, the same moment is repeated!

Make no mistake; found in the pages of God’s Book is an affirmation of His love, mercy, grace, patience, and even His justice!  But respecting or affirming the Bible is the truth is not enough … obedience to that truth is a must!

It is when His acts of justice are demonstrated and recorded for our learning that we sometimes fall back on our heels and are tempted to wonder … was God too severe? … Did He really need to do that?

One of the instances where the justice of God is pointed out is recorded in 2 Samuel 6 with the account of King David bringing the Ark of the Covenant back to Jerusalem.  It had been taken away by a foreign army for so many years. But David chooses to not seek guidance from the Lord on how to accomplish this effort.

What happens next is both startling and shocking.  Choosing to transport the Ark in a way different than God had previously authorized, David makes a bad choice and that choice would lead to the death of a man named Uzzah (2 Samuel 6:1-6).

Now … when we read the account … as they are moving along on the road back to Jerusalem, one of the oxen stumbles … and Uzzah reaches out to stabilize the Ark that he thinks is about to fall.

The problem …Uzzah was not authorized by God or by God’s Word to touch the Ark!  The result was that it cost him his life right then and there!

So … what’s the point of this article?  Our point is … we are to “… ask for the old paths where the good way is, and walk in it!” (Jeremiah 6:16, NKJV) We should always at every crossroad of life be looking for the godly, the God-revealed right way!

Unfortunately, in far too many cases throughout the history of mankind starting back in the Garden, and even now including our own time, men reenact the response recorded in the same passage, “But they said, ‘We will not walk in it.’” (Jeremiah 6:16, NKJV)

← A Clarion Call To Be Perceptive
Walled Up Hearts … →

“Come Let Us Reason Together …”

“Come now, and let us reason together, says the Lord …” (Isaiah 1:18, NKJV)  Imagine if you can what it would be like to have a personal audience with the God of Heaven and hear directly from Him about life and living … about your life and about the way you are living! Well, we […]

“… That you may become blameless and harmless, children of God without fault in the midst of a crooked and perverse generation, among whom you shine as lights in the world,” (Philippians 2:15, NKJV) This past week in the State of Texas … literally the entire state from Galveston Bay on the edge of the […]