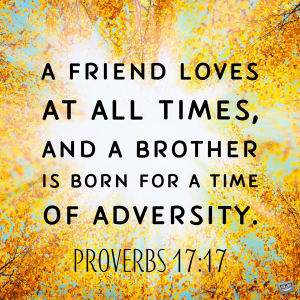 It is amazing … the mind God has given to us who have been “created in His image.”    Much is being written, witnessed, and experienced in our culture today about the mind of man and how sad it is to see it wither in those we love by the tentacles of dementia!

It is also amazing when we are able to read or hear something that strikes a familiar chord from days gone by with clarity.  Just such an event recently happened in my life.  I had read the story before … many years ago.  I even wrote it down for safekeeping and future use.  But as happens far too often, at least in my case, I misplaced, misfiled, or simply lost the index card it was written on.

The captivating thing about the article was that I never forgot the punch line and along with it I was never able to get the imagery out of my mind either.  It’s a story that speaks volumes on many levels.

“Too often we underestimate the power of a touch, a smile, a kind word, a listening ear, an honest compliment, or the smallest act of caring, all of which have the potential to turn a life around.”  — Leo Buscaglia

The qualities of loyalty, empathy, compassion, love, a willingness to do for others even when a great price or sacrifice is paid … these qualities are rare gems that seem to be disappearing in our world where a personal sense of entitlement and instant gratification co-exist to our detriment!

I want to share the lost but found story with you in hopes that each of us will slow down (although most of us have had to at least a little bit with the Coronavirus issue still lingering) … to slow down and drink in the value of faithfulness to someone we love and care so much for!

It’s not as common as most of us would think … but it should be … this biblical concept of compassion, caring about and for others!!  There is so much room in the world around us for these gems of life… within our own families and close friends… among our brothers and sisters in Christ.

Here is the story …

AN OLD BOY Scout manual told the story of two brothers who were fighting side by side in France. The brothers struggled to rejoin their unit, but only one made it back safely. He approached his commanding officer and asked permission to retrace his steps in an effort to find his brother.

The officer shook his head. “It’s too dangerous,” he said, not without pity. “Your brother is probably dead, and there’s no use risking your life just to find him dead.”

The brother persisted, however, and begged the officer to let him try. Finally, the man agreed, and the soldier dashed back toward the enemy fire to hunt for his brother. Sometime later, he returned with his brother draped across his shoulders. But just as he reached the safety of the bunker, his brother gasped and died in his arms.

“You see,” said the officer. He clapped a hand on the soldier’s shoulder and shook his head. “I let you risk your life for nothing.”

“Oh no, sir,” the brother answered respectfully. Tears welled in his eyes. “No, sir,” he repeated emphatically. “You see, when I crawled up beside him where he lay, hurt and dying, and I took him in my arms, he said, ‘I knew you’d come, Tom. I knew you’d come.’”

It is hard for me to imagine what must have gone through the living brother’s mind to hear those dying words from his own brother.  But it is not hard for me to imagine the joy and blessing that has come to me over the years when in a valley of despair, or in the midst of an overwhelming and suffocating experience … a call from a friend out of nowhere … a little note in the mail … a text that lifted me up … and I could say in my own mind, but admittedly out loud when no one was around, “I knew you’d come!”

It is the rare, the precious, the trustworthy, the genuine and true strong friends … they are always there when we need them the most!  Love requires sacrifice, even as “God so loved the world that He gave His only begotten Son …” (John 3:16)

The apostle Paul would say it this way by inspiration, “For one will scarcely die for a righteous person, though perhaps for a good person one would dare even to die, but God shows His love for us in that while we were still sinners, Christ died for us.” (Romans 5:7-8, ESV)

To drive home the significance of such joy and compassion at the arrival of and the deeds of someone who cares we can only pause and consider the greatest time of such a statement.  When the Lord does return to” judge the world in righteousness” (Acts 17:31) … for those who have lived and prepared for His coming … surely they will exclaim with great joy:  “I knew You would come!”

← You Can Lead A Horse To Water, But You Can’t Make It Drink!
When Shame Takes Us Hostage … →

More Than Just A Plaque On The Wall

“… But as for me and my house, we will serve the Lord.” (Joshua 24:15, NKJV) There are characters of the Bible that stand out because they stood up!  Joshua, who from his younger days as a slave in Egypt … through the wandering days of the wilderness … to becoming the man God wanted […]

When Our Hearts Have Become Broken

“But indeed, O man, who are you to replay against God?  Will the thing formed say to him who formed it, ‘Why have you made me like this?’ Does not the potter have power over the clay, from the same lump to make one vessel for honor and another for dishonor?”  (Romans 9:20, 21, NKJV) […]