This Little Light of Mine … 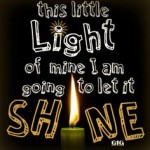 This Little Light of Mine …

“Let your light so shine before men, that they may see your good works and glorify your Father in heaven. “ (Matthew 5:16)

There’s something about watching a small child learning the tune, words, and the exaggerated movements to a new and catchy song! I can remember as if it were yesterday when each of our three kids began to learn the song, This Little Light of Mine when they were so little and to see the gleam in their eyes, the smile on their faces, hear the excitement in their little voices and the words that you sometimes had to listen to very carefully to make out what they were trying so hard to say. In this song, it would be when they came to the verse where it talks about “Don’t let Satan blow it out. This little light of mine, I’m gonna let it shine.” and they would hold their little finger up and they would blow out as if to put out the candle and get a serious look for a moment. The fact is, we should all retain that serious look when it comes to our own “little” lights to insure they are not ever blown out … whether by life and its hardships, the ongoing efforts of our adversary to tempt and ultimately own us, or by finding life so good that we simply forget from whose hand it has all come!

The very definition of “light” tells us of its significance: “to make reality or truth visible, thereby giving direction and guidance by what is seen.” No one in this world actually lives to himself or herself! The Lord never intended for those who would choose to be His people to live in isolation, but rather to have a positive influence on those around them who would see their lives and hear their words and be led to serve the Lord. Folks, it is a Christian’s privilege and responsibility to live in such a way (though not perfect, Romans 3:23) that they are able to make the One true and living God visible in a very dark and evil world that is truly blind to Him. The old line of “the only sermon some ever hear is the life of one living before them with God” is more significant than we may realize.

There have been many in my life who served to be a “light” to help me keep on the right path and I will forever be grateful for their good, worthy and godly example and influence. We need to be asking ourselves “what kind of light am I being to others?” Each one of us can so live and conduct ourselves on a daily basis that we can be a source of encouragement and strength. Granted, some have greater influence than others, but we must be very careful not to buy in to the worldly and prideful view of being the biggest or largest light or buy into the devils suggestion that we are of no value or significance to anyone! We don’t need to be like the spotlight mounted on law enforcement vehicles, we just need to so live and conduct our business in this world that when life has ended we can hear the Lord say to us, “well done, good and faithful servant.” May we live in such a way that it can be said of us as it was at the death of a young Christian, “it was easier to be good when she was around!” Yes, “I’m gonna let my little light shine!”

“And those who are wise shall shine like the brightness of the sky above; and those who turn many to righteousness, like the stars forever and ever.” (Daniel 12:3)