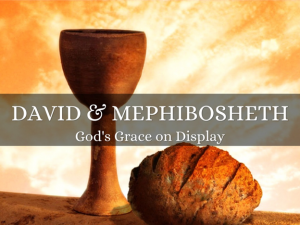 “And the king said, ‘Is there not still someone of the house of Saul, that I may show the kindness of God to him?’ Ziba said to the king, ‘There is still a son of Jonathan; he is crippled in his feet.’” (2 Samuel 9:3, ESV)

I love the Bible!  I love reading and reading again the various stories recorded within its pages that serve to give a refreshing nudge to continue faithfully serving Him with the hope of spending eternity with Him!

God in His infinite wisdom revealed His will for mankind in a way that we can understand!  He provided glimpses into the lives of so many in order for us to learn His lessons about life for each of us.

The legacy of David enriched God’s people, Israel, for centuries … even as his life continues to inspire and encourage us to serve the Lord now in Christ.  His life was in no way perfect, but he is the only Bible character that I am aware of identified as “a man after God’s own heart.” (1 Samuel 13:14; Acts 13:22)

To the casual reader of the Bible, there is an almost hidden story from David’s life, hidden only because they have not read it or become familiar with it.  But it’s there, and it is there for a number of reasons.

The story is about a young man hardly mentioned in the Scriptures with royal blood in his veins.  His name, not a household name, was a young man named Mephibosheth.

The conversations, the actions of this glimpse into David’s life all tally up to form an unforgettable and moving story! This is a story revealing the virtues of kindness, compassion, mercy, and grace … and it is one we should want to revisit often.

Allow me to share with you a brief backstory to this wonderful chapter in King David’s life:

David, rather than harboring ill-will from the many hardships imposed upon him by King Saul, including attempts to have him killed  … chose to take the high road!  His unsolicited kindness toward Mephibosheth provides us with great insight into David’s heart … and why he was so loved by God!

We might easily pass over this story as being quaint or charming, but it is much more than that.

Therefore, David chose to do what was right.  He honored the feelings he had for Jonathan and Saul. He did this by restoring all of Saul’s lands to his grandson, Mephibosheth.

“And David said to him: do not for I will surely show you kindness for Jonathan your father’s sake and will restore to you all the land of Saul your grandfather, and you shall eat bread at my table continually” (2 Samuel 9:7).

David recognized that he was just like each one of us … a sinner in need!  And he realized the undeserved mercy he had received … the amazing kindness extended to Him from the hand of God!

He is such a worthy example of one who loved much because he recognized that God loved Him so much!

It is no secret that the world can and often does harden us with all of its selfishness, evil notions, and an increasing degree of anger and just plain meanness!  It should come as no surprise though because God revealed through the inspired writings of Paul centuries ago that it would be so (2 Timothy 3:3).

Everything being equal … it is still ours to be on this watch … at this time in the world’s history … to be kind to others … as David was to Jonathan’s son … as God continues to be toward each of us!

We must never … never … ever … forget how marvelous and amazing God’s character is in every way! (Isaiah 54:10) As He has demonstrated His kindness time and time again … helping those who are hanging on to life … even to their faith … by a thread … just to keep going!

Even as He is so kind to us … is there not room in our hearts to extend the “kindness of God” to those we come in contact with?  I sure would like to be that kind of person, wouldn’t you?  This is what our world needs to be seeing more of … even today!

Like a lighthouse sharing its beam across the stormy waters … David’s kindness demonstrated to Jonathan’s son is a wonderful, eye-opening, heart challenge for each of us to measure up to!  And the wonderful truth is … we can!

The question is:  Are we willing “to “go and do likewise?”

← Just A Whiff Of Home
We Have All Been So Blessed →

“And Elisha prayed, and said, “Lord, I pray, open his eyes that he may see.” Then the Lord opened the eyes of the young man, and he saw.  And behold, the mountain was full of horses and chariots of fire all around Elisha.” (2 Kings 6:17, NKJV) Our gracious and loving Heavenly Father, because […]

Last week we talked about walking closer with God…how are you doing with that this week?  We included in our post one of my favorite verses Psalm 119:105 “Your word is a lamp to my feet and a light to my path.” Are you letting the light of God’s word lead you this week? I pray you […]