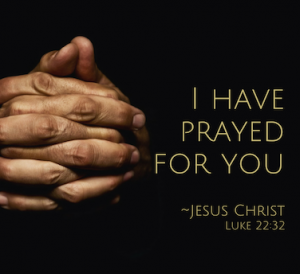 “But I have prayed for you, that your faith should not fail; and when you have returned to Me, strengthen your brethren.” (Luke 22:32, NKJV)

I don’t know what challenges and difficult times you might be facing at this moment … but the Lord does!

I don’t know what unpleasant conversations or events you have experienced in the past … but the Lord does!

I don’t know what kind of future your life here on earth will entail … but the Lord does!

And so, we pause and consider a peek into the events of the night before the day that Jesus Christ would be crucified!  Gathered with His chosen Apostles in an upper room,  a series of conversations can be heard.

But then, the conversation between Jesus and Peter takes place.  He has walked with the Lord for some 3 years and has acknowledged Him as the Son of God (Matthew 16:16).

And now, Jesus looks into the eyes of Peter and tells him that “Satan has asked to sift you as wheat” … the idea being Satan wants to put before Peter the most serious challenge since his identification with Jesus … and watch him fall!  What a bombshell that must have been.

Can you imagine what went through Peter’s mind at that moment?  What would have gone through our minds? Most of us would probably have responded as Peter did, “Lord, I am ready to go with You, both to prison and to death.” (Luke 22:33)

But we have passed over the main thought to consider which is what the Lord said to Peter before Peter’s bold affirmation.  The beautiful and reassuring words, “But I have prayed for you, that your faith should not fail; and when you have returned to Me, strengthen your brethren.” (Luke 22:32)

To be sure, Jesus also prayed for the other apostles (John 17:6-19), but at this particular moment, it was Peter who was most in need of these tender and reassuring words of hope and even promise!

We know the rest of the story, don’t we?  Jesus predicted that Peter would deny Him that very night 3 times before the rooster would crow three times.  And Peter did just that!

Following the LOOK from Jesus after his third denial, “Peter went out into the night and wept bitterly!”(Luke 22:62)  But he would then go on to become one of the most effective apostles in his proclamation of the gospel of Christ!

There is one more page to this story … and it is about each one of us.  You see, in what could be correctly identified as the true Lord’s Prayer recorded in John 17, we read that He also prayed for each one of us.  Please read the following verses that each one of us needs to read and re-read over and over in our journey through life:

“I do not pray for these alone, but also for those who will believe in Me through their word, that they all may be one, as You, Father, are in Me, and I in You; that they also may be one in Us, that the world may believe that You sent Me.  And the glory which You gave Me I have given them, that they may be one just as We are one;  I in them, and You in Me; that they may be made perfect in one, and that the world may know that You have sent Me, and have loved them as You have loved Me.” (John 17:20-23)

How reassuring it must have been to Peter as well as the rest of the Apostles to know Jesus was praying for them!  I covet the prayers of others and have realized the strength and encouragement of knowing they are doing so … especially in the darkness of a terribly dark night!  How about you?

To know that even as He prayed for Peter, He has prayed that we would hold on to our faith in the face of whatever temptation and trial we might be called upon to face is a wonderful truth to be aware of!.

But to know … to have the assurance that the Son of God has prayed for us … the thought is so sublime that the only words that can be offered are those of “Thank You, Lord!”

31 What then shall we say to these things? If God is for us, who can be against us? 32 He who did not spare His own Son, but delivered Him up for us all, how shall He not with Him also freely give us all things? 33 Who shall bring a charge against God’s elect? It is God who justifies. 34 Who is he who condemns? It is Christ who died, and furthermore is also risen, who is even at the right hand of God, who also makes intercession for us. 35 Who shall separate us from the love of Christ? Shall tribulation, or distress, or persecution, or famine, or nakedness, or peril, or sword? 36 As it is written: For Your sake, we are killed all day long;
We are accounted as sheep for the slaughter.37 Yet in all these things we are more than conquerors through Him who loved us. 38 For I am persuaded that neither death nor life, nor angels nor principalities nor powers, nor things present nor things to come, 39 nor height nor depth, nor any other created thing, shall be able to separate us from the love of God which is in Christ Jesus our Lord.”  (Romans 8:31-39)