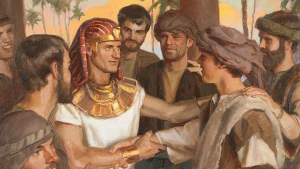 “By faith Joseph, at the end of his life, made mention of the exodus of the Israelites and gave directions concerning his bones.”  (Hebrews 11:22)

God doesn’t find and use the ones who are “perfect in every way” … because there was only one who was perfect and that was Jesus Christ, the Son of God!

The world is so confused about the meaning of faith and its ability to lead one to make the right choices and live the right way in order to please the God who made them!

Faith is not some shallow and weak emotion or feeling that we can conjure up and allow to become ‘what we would like for things to be!’

True faith … the faith that is defined and described and exemplified in a collection of Biblical characters over many centuries … is grounded on the “inspired and infallible Word of God!”

It is because God has instructed us … not simply suggested to us that it might be good for us … that we choose to no longer serve ourselves, but surrender our will, our very lives, to the Lordship of Jesus Christ! We choose … to live and teach others about the need for a “thus says the Lord!”

Having just concluded an excellent Bible Class study on the Book of Genesis … there are a number of memorable characters who found themselves in the very throes of God’s great plan for the redemption of mankind, now separated from their Creator by the introduction of sin in the Garden.

One such character is Joseph.

Something came out of my study for each class session that will stay with me. My very own soul and spirit have been strengthened by this man of faith, and I am challenged to follow his lead for the rest of my life.

Here was a man who by every sense of measurement became a person who made a difference at every level of his life by reason of his faith and trust in the Lord and in His promises!

A young shepherd boy, dearly loved by his father but hated by his brothers who plotted to get rid of him and convince their father that he was dead. They put him in a pit, then sold him into slavery. He was taken away to a country foreign to him and every time something good happened something bad came of it.

During all those years of unimaginable challenges, he never stopped trusting in God and the promises God had made. And he was the one God used to save the lives of his own family and many others. In his death, he requested that his remains be placed with those of Abraham, Isaac, and Jacob.

If only, we could learn from his life and example to be more dependent … more accepting of the majesty, power, and love of God Almighty … who in His own words “changes not!”

He demonstrated a calmness … a disposition of integrity … an amazing ability to forgive … a deep and abiding love for his father … and yes … even his brothers who had treated him with such meanness fostered by envy and jealousy!

You and I have the opportunity to make a difference … a difference in the lives of family, friends, neighbors, the workplace, and the world in general, however wide or narrow our sphere of influence!

We may not reach the plateau of a Joseph, but the apostle Paul encourages each one of us to put in the effort to make the contribution that God has assigned to each one of us (Ephesians 2:10)

There are some steady and solid Josephs, men and women who end up in places of significant leadership and help many people. The church has more Josephs than we realize, people who just do their jobs faithfully, put up with misunderstanding and criticism, and glorify God. And, like the Old Testament Joseph, even after death they encourage us to trust God.

God keeps every promise, even as He did with each of the Patriarchs. Those who serve Him, though not perfect, are precious to God. He will be with us as we journey through this life! My friend, brother, or sister in Christ, resolve to be the best “pilgrim, sojourner” you can be “walking in the light of God’s Book” and ensuring that it is our only dependable “lamp to our feet and light to our way.”

“For we are His workmanship, created in Christ Jesus for good works, which God prepared beforehand that we should walk in them.” (Ephesians 2:10)