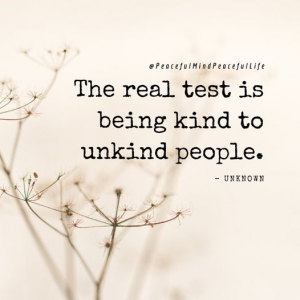 “For to this, you have been called, because Christ also suffered for you, leaving you an example, so that you might follow in His steps.  He committed no sin, neither was deceit found in His mouth.  When He was reviled, He did not revile in return; when He suffered, He did not threaten, but continued entrusting Himself to Him who judges justly.” (1 Peter 2:21-23, ESV)

I’m not really sure when it first started as something practiced by so many.  Perhaps it was in the Garden when Adam and Eve were confronted by God for their disobedience and they began to speak to each other in finger-pointing, retaliatory way.

Maybe it was when Cain realized his brother Abel’s sacrifice was pleasing to the Lord and his wasn’t.

But what I do know is that mankind has perpetuated rancor, unkindness, rudeness over and over and over again … becoming very proficient at ridiculing and demeaning others!

Maybe more of us than we would care to admit are like the man I read about who was bitten by a dog.  When he went to the doctor, it was confirmed that he indeed had rabies.

The man when he heard this diagnosis borrowed a prescription pad and began writing on the backside.  Seeing this, the physician assumed he was panicking and writing out a quick will.  “Don’t worry, you’re not going to die … there is a cure for rabies.”

What we’re getting at is this instruction from the Lord given by inspiration to the Apostle Paul to record, “Beloved, never avenge yourselves, but leave it to the wrath of God, for it is written, ‘Vengeance is Mine, I will repay, says the Lord.’” (Romans 12:19, ESV)

What is so hard for us to realize and even accept is this:  when folks are unkind in their words/actions/deeds … when they are rude, demeaning … these things are allowed to happen to help each one of us to follow more closely the steps of Jesus Christ … who willingly suffered for us and offered His blood on the Cross to atone for our sins!

Would we handle it better if we first remembered we had asked the Lord to be with us?

Allow me to ask each of us a couple of questions that require honesty and self-reflection:

The self-discipline necessary … when someone chooses to slander our reputation or insult those we love … when an employer unexpectedly stops our needed income leaving us in a difficult place financially … requires something of us that at the least is so difficult to attain!

We are often quick to get offended … quick to get angry … quick to retaliate.  And that is exactly why listed among the qualifications for one who is being considered to serve as an elder God includes, “… he must be blameless, as a steward of God, no self-willed, not quick-tempered…” (Titus 1:7, NKJV).

As a matter of fact, the New Testament frequently speaks of the need for “kindness, gentleness, mercy, and grace” to be descriptive of those who are called “Christian.”

So, living in a world that seems to be so angry, short-tempered, rude, and abusive … let’s all try to do a better job of walking in the footsteps of Jesus.  Big shoes that are impossible to fill, but like the child following his parent’s footprints in the sand … striving to follow step for step!

Let’s start today with just today!  And then, if the Lord wills, tomorrow, followed by every tomorrow He blesses us with.

Remember what happened in the Garden of Gethsemane … Judas approaches with the soldiers to plant the kiss of betrayal on our Lord’s cheek.  Peter steps in with brandished sword and lops off the ear of one of the high priest’s servants.  What did Jesus do … He healed the severed ear! (John 18) Just give some thought to what this really says about Jesus’ heart!  “Oh to be like Thee, blessed Redeemer.  Purist Thou art …”

← The Choice Between Kindness and Rudeness
The Perfect Father →