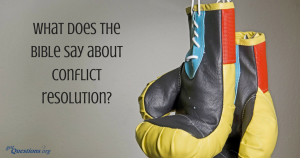 “Then he said to David: “You are more righteous than I; for you have rewarded me with good, whereas I have rewarded you with evil.”  (1 Samuel 24:17, NKJV)

There are times in our lives when disagreements, misunderstandings, and quarrels lead to hard feelings harbored and even verbally spoken.

There are times when relationships become shaky … marriages become suspect … friendships are in the balance … fellowship with brothers and sisters in Christ is challenged!

I will readily admit that I don’t like conflict … but in the same breath it must be affirmed there are times when the differences that have come between us must be corrected if possible.

Paul wrote in Romans 12:18, “If it is possible, as much as depends on you, live peaceably with all men.”

Sadly, not everyone is amenable to establishing peace choosing rather to be upset and to think and act like the world rather than being Christlike!

God’s expectations of His people are not more than can be met … but they are high … therefore requiring us to ‘take the high road’ … “the way of salvation!”

When we are trying to do all that we can to attain and maintain peace … sometimes things don’t work out that way!

Sometimes when meaning only the best … words are spoken … actions are exerted … then problems begin to raise their ugly heads.

When that occurs … and it will because we are human … oftentimes we become stubborn and self-willed!  We want our way!

We cannot afford to pretend conflicts don’t exist or in some way convince ourselves they will self-correct sooner or later!  Wrong assumption!

The Lord, just as He has done with every other need of mankind, has provided the way, the means, and to an extent even the words to bring about conflict resolution.

But the Bible doesn’t call it conflict resolution.  It employs the use of the term “reconciliation” … “to make compatible again, to make friendly, cordial, agreeable again.”

As difficult as it is to be in some kind of an adversarial role with a loved one, friend, brother, or sister in Christ … try and grasp being an enemy of God … being at odds with Him … not being at peace with Him! (Romans 5:8-11)

And significant about this love of God for us … it also requires that we seek the best interest of others!  We cannot afford to carry a grudge … ill will… hard feelings … animosity and bitterness towards anyone … and expect to see Heaven!

In the story of King Saul and his pursuit motivated by jealousy and envy, trying on numerous occasions to kill David … the amazing attitude of heart that characterized David who was to ultimately take the throne was one of sparing life … making peace … one of reaching a reconciliation between them!

The Bible is full of wisdom about how believers should handle conflict.  And there are numerous examples in both testaments illustrating the nature of man to have issues with others!

And as one of the credible pieces of evidence of divine inspiration … God has preserved cases of success and failure when it came to settling disputes and disagreements.

David and Saul reached an agreement!  While Saul’s promise would only be temporary (1 Samuel 26), David would keep his word to Saul.

If a genuine commitment to do one another good is not reached, then reconciliation has not taken place.

One’s character is usually revealed by their conduct!

But perhaps the greater point … the reason such examples have been preserved in God’s Book … is just how much we can learn about ourselves!

How do we respond to conflict in our own lives?  Do we choose to imitate David and have a strong desire for peace?

Or do we find ourselves acting like King Saul … on the hunt?

When we are confronted with the evil we have done … are we willing to acknowledge our sin and repent … or do we adopt the defensive position?

Just as Jesus resolved our conflict with the Father, we should seek out ways to help resolve a conflict between our own family and friends.

We honor God when we seek to follow his commands and trust His wisdom through even the most difficult times of conflict.  When we strive to reflect God’s love, forgiveness, grace, and mercy to those we are in conflict with, we provide a beautiful witness to God’s character and glorify Him.

Peace is possible if we look to Him.

Mathew 5:9: “Blessed are the peacemakers, for they will be called Children of God.”