What A Bible Class … 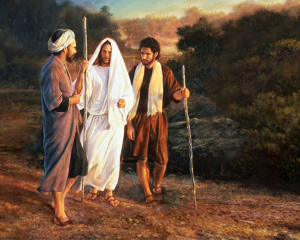 “And they said to one another, ‘Did not our hearts burn within us while He talked with us on the road, and while He opened (“explained” “made plain”) the Scriptures to us?”  (Luke 24:32)

There have been recorded in God’s Book, the Bible, so many distinct and mind-stopping events preserved for our benefit and learning.  What a wonderful blessing our God has bestowed on us to share these truths with us.

Readily, there are some recorded events I would not have wanted to be present for such as the destruction of Sodom and Gomorrah, or even the destruction of Pharoah’s army when the wall of waves descended and engulfed them as they pursued the Israelites.

But there are so many other recorded events, not myths, not made-up stories to be told around a campfire somewhere!  One such event that has been recorded, preserved, and perhaps should be read with frequency is the account of two disciples walking alone on the road to Emmaus.

The events recorded in Luke 24 occur on the “very day” that Jesus arose from the grave. Luke describes how two of His disciples are traveling on the road to the village of Emmaus and they were discussing the events of the last few days. (Luke 24:13-15)

As we listen in on their conversation, the disappointment is obvious … the sadness is hovering over their every word … their obvious discouragement and dispirited disposition were looming large.

This is one of those times … one of those conversations in God’s Word that would have been wonderful to overhear.  Just try and imagine the scene:

Try and imagine Him “starting with Moses and going through the Old Testament, bringing out those Scriptures that related to Him,” and that He fulfilled by His birth, life, death, and resurrection!  What a Bible class that would have been. (Luke 24:27)

These two disciples had retained some measure of their love for Jesus Christ … they had held on to their faith in part … but it appears they had lost their hope …  their zeal!

And this is where we want to focus in on a very significant truth that cannot and must not be overlooked.  After their report, Jesus did something that ought to be repeated every day in every home, community, and place wherever people are found!

Jesus opened the Scriptures … He opened their eyes of understanding … and they then realized that Jesus was not only alive … He was right there with them!  What a Bible class!

It is then, that we find the beautiful affirmation of our opening text, “… did not our hearts burn within us while He talked with us on the road, and when He opened the Scriptures to us?” (Luke 24:32)

The question we must ask of ourselves is this:  Has that same fire been burning in our own hearts?  Or has it almost flickered out?

Luke prefaced the Book that bears his name with “I am going to write to you, Theophilus, in the most precise manner possible so you will KNOW these things.” (Luke 1:1-4)

And that is exactly what he did … and now … here we are in the 21st Century … and we are the benefactors of these truths!  What will we do with them? Hide them, ignore them, share them with anyone and everyone who will listen?  It is our choice.

Dr. Luke gives us a very clear picture of the driving and wonderful message of the early church … the resurrection of Jesus Christ has made it possible for all men to overcome the fear of death … found only in Christ Jesus!

The “King of kings” is alive, and He sits at the right hand of the Father!

If Jesus came forth from the grave … so will I … and so will you!