When He Knocks On Your Door … 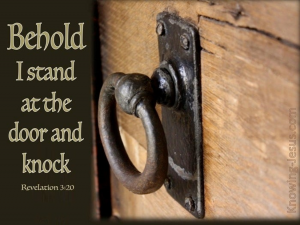 “Behold, I stand at the door and knock.  If anyone hears My voice and opens the door, I will come in to him and dine with him and he with Me.”  (Revelation 3:20)

On one occasion, one of the elders and I had arranged to come by and visit a family that was growing weaker by the week … the blinds were pulled closed … but you could hear the tv (first clue).  We rang the doorbell to no avail.

We knocked on the door … no response … except we saw one of the blinds lifted up only slightly (second clue).

So, we knocked on the door again … with no response. We simply asked, “Is anybody home?”  To our surprise came the voice of one of the kids … “There’s nobody home!”

Although humorous … the door was not opened.  Those who so needed the door to be opened and to hear … not words of condemnation but words of encouragement prompted by a love for the Lord and the souls of men … chose on that day to ignore the well-intentioned visit!

I hate sin … in every form it presents itself in!  Its effects on the hearts and lives of each of us is beyond full comprehension.

Sin, in any form, is the only thing that can keep one from spending eternity with the Lord!

The letter in our text was from the Lord … a dispatch to the church at Laodicea with an urgent and loving appeal. Changes needed to be made … lives improved … hearts needed to become more tender and moldable, teachable!

I don’t know how this could happen to a congregation of the Lord’s people.  I can read from Scripture … I can relate by personal observation … but to really get down to the core driving point … is difficult to see, read, and even admit, but it happens.

And it is happening in our 21st-century world … sometimes right where we are … and that is what perhaps frightens the most!

If we are not vigilant … sober-minded … otherworld-minded zeal can be replaced with indifference … tolerance suppresses truth … being popular or like the world supplants godly sorrow over sin!

As the Lord had expressed in the other six letters to the “churches of Asia” … being the Creator, the personification of absolute truth … He knew what was and was not taking place in the heart of every member individually as well as collectively!

There is nothing on earth more contagious than a person who is getting closer to the Lord.

This verse could certainly be applied in an evangelistic way to appeal for initial acceptance of the Gospel and a willingness to surrender one’s life to the Lord.

But in reality, like all the seven letters in the book of Revelation 2 & 3.  this is a warning to the Church of Christ (saved believers who are part of His Body and Bride).

And in His great love for all His children, the Lord continues to plead with every one of His born-again children to yield to the call of his voice and live godly in Christ Jesus: “Behold, I stand at the door and knock; if anyone hears My voice and opens the door, I will come in to him and will dine with him, and he with Me.”

Jesus loves us so much that He died for our sins and gave us a new life that must be conformed to His image and likeness.

I pray that we would always be willing to open the door of our hearts to Jesus to come in and fellowship with us, for in Him is fullness of joy.

Our Lord never forces His will on any man! He knocks … He waits … He knocks … patiently waiting for you and me to open the door and say “Come on in … I need you, oh I need You!”

Life with Christ is an endless hope; without Him a hopeless end. – Unknown!

Is He knocking on “the door of your heart” even now?  Will you peek out of the blinds, see who it is, and ignore His voice?  Don’t be one of the foolish of this world who chooses to leave Him outside!

What He promises to bring into your heart is described as “the unsearchable riches of Christ.”  How could we not want to partake in that which He alone offers?