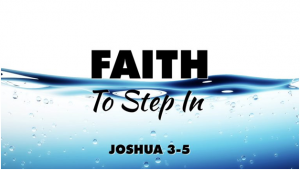 “And as those who bore the ark came to the Jordan, and the feet of the priests who bore the ark dipped in the edge of the water (for the Jordan overflows all its banks during the whole time of harvest), that the waters which came down from upstream stood still, and rose in a heap very far away …” (Joshua 3:15-16a, NKJV)

It has been my privilege to work and worship with wonderful congregations of God’s people over the years.  For some time, we lived and worked with a congregation out in West Texas known as the Permian Basin.  Crane was the name of the town … wonderful people … lots of rattlesnakes … tarantulas … and scorpions!

As we had a number of opportunities to baptize those who learned what they needed to do in order to have their sins forgiven … there were several steps that needed to be taken.

You see, every time the waders were pulled down off of the hook on the wall, they needed to be shaken upside down to let any scorpion that had taken up residence there fall out and meet a sudden death!

Next, as I would lead the person about to be baptized around the corner and out into the main portion of the baptistery that rested on the side of the pulpit … invariably there would be at least one and sometimes more scorpions … dead and waterlogged of course.

But the sight of them on the bottom of the baptistery would cause alarm, even hesitancy if just for a moment.  Reassurance was given … a gentle pat on the back … a swift moving of the drowned creature by one of my feet … and we could proceed with helping them “put Christ on in baptism.”

God’s Book, the Bible, is in fact “the inspired Word of God”… and it records the history of this world.  It tells the story of real people … living in a real world!  And God shares with us the good, the bad, and the ugly of mankind.

Sometimes, we may find ourselves thinking of these Bible characters in an abstract kind of way.  And we do a disservice when we do … because they were actually real people … just like us … with their strengths, weaknesses, fears, reservations, hopes … and sin!

We read in Joshua 3 where it has now come time for God’s people to make the move … the move from wilderness wanderings to occupying the long Promised Land that God had foretold to Abraham hundreds of years prior!

But between them and that land was flowing the Jordan River, swollen from the melting snows upriver.  Fast-moving currents that must have been ominous to say the least.

Under Joshua’s leadership based on instructions from the Lord Himself, protocol was established.  God’s will … God’s way … God’s glory.

For three days … this nation was encamped on the eastern bank … listening to the waters rumble and roll … no doubt watching the usual debris … and wondering how in this world are we going to get across this water safely!  We must not kid ourselves … these people were human … apprehensive … perhaps even a bit fearful!

But the word came … ‘let’s move out’ … priests first carrying the Ark of God on the shoulders exactly as He instructed them to do.  And when they dipped their feet into the lapping waters of the Jordan … the unbelievable as far as man is concerned happened.  The waters stopped a number of miles upstream further than their eyes could see.

The riverbed dried up … the priests walked on dry land to the middle of the Jordan bed and stood … holding the Ark up for all to see as they passed by!  And they did … they all passed by, the young, the older, the weak, the strong, even those who may have doubted … and they passed safely to the other side!  The Land of Canaan awaited their possession with God’s direction and help!

Just a couple of thoughts for us to consider among so many that can be gleaned from this event:

What faith … what trust … even in the face of fear and apprehension … was required for these “priests to just dip their feet into the edge of the river!”  They didn’t run into the water, they didn’t even walk out into the water … they simply in faith took the short step of placing their foot to the river’s edge … but in faith.  When their feet touched the water … God acted!

He is still acting in the world we now live in!  The universe functions in the same timely and predictable way as when He created it!

God is still on His throne (Revelation 4)!  He is still very much in control!  He has His own timeline and no man can rush it, adjust it, change it, or control it!

Our duty, our privilege, our honor is to believe in … trust in … obey and serve the “Great I Am” while it is our own time.