“Cords of Kindness … Bands of Love” 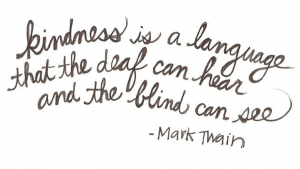 “I drew them with gentle cords, with bands of love, And I was to them as those who take the yoke from their neck.  I stooped and fed them.” (Hosea 11:4)

I used to think that as we grew older, we might be able to slow down. I have concluded that this line of thought was more of a delusion than reality.

Isn’t it so … we’ve all got so much to take care of … things to do …  people to look after … and even care for? Some of our own doing … some simply because others truly need us!

Life can really get busy!

There is a passage of Scripture, almost obscure in the intriguing book bearing the name of the prophet Hosea that just might be of help to you as it has become for me. A reminder that God is always aware of me.

Reading this amazing book, we discover the overriding theme of God’s faithfulness to His unfaithful people! The beautiful words of our opening text are a clear and reassuring proclamation of the Lord’s great love for His people … in spite of their wicked habits and actions.

What we want to emphasize expressly is the beautiful and stunning, yes, stunning … and humbling picture of the kindness of our God toward His people of old … and the truth that He has not changed in our time toward those who are His people.

God’s aim is to bring us to Himself. And the language He employs by inspiration through His prophet may appear a bit strange … but the message being shared is clear …  beautiful … beyond amazing!

Through the recounting of their history and God’s promises, protection, and provision … this large contingency of people became a nation following their deliverance from Egyptian bondage.

This is what God did for His people back then! God led His people with a bridle of kindness … love … and mercy in spite of their many failings!

It would be His “only begotten Son” who would say centuries later, “No one can come to Me unless the Father who sent Me draws him; and I will raise him up at the last day.” (John 6:44)

We have been so blessed by the provisions of the life-giving, soul-saving Gospel revealed in the Bible! We find the source of guidance, direction, and comfort. We find the path that leads to eternal life when taken!

God’s kindness has been on full display from the beginning of time, “drawing us” to a relationship with Him on His terms, by His truth, in His way! He loves us … sent His Son to die for us … and is preparing us in this life for eternal life! What kindness! What grace! What love!

We as His people in the 21st Century … as a “called people” have been called to live out the kindness Jesus Christ demonstrated over and over again. The kindness that is to be extended to our enemies as well as our friends … to those who are evil and ungrateful!

We are to be “drawn” by the remembrance of all that our God has done … is doing … and promises to do for each of us in the future to be more like our Lord, Savior, and King … exemplifying kindness in a very unkind world!

Mankind has demonstrated down through the ages the propensity to re-enact Israel’s mistakes of old:  enjoying God’s many blessings while taking the Giver for granted!

Are we truly aware and thankful for all He is doing for us as His people now?

PS:  How is your daily Bible study?

← If We Never Meet Again … This Side Of Heaven
How Could They Do That? →