How Could They Do That? 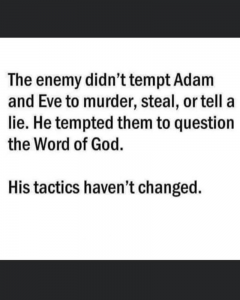 “But I fear, lest somehow, as the serpent deceived Eve by his craftiness, so your minds may be corrupted from the simplicity that is in Christ.” (2 Corinthians 11:3)

As the curtain draws at the end of Genesis 2 … the universe was just as God had intended for it to be!

Adam and Eve, the first man and woman were in their first home. The Garden of Eden was a pure, magnificently beautiful place where God Himself had provided for their every need.

Their future and happiness depended on the words God spoke in Genesis 2:16-17, “And the Lord God commanded the man, saying, Of every tree of the garden you may freely eat: but of the tree of the knowledge of good and evil, you shall not eat of it, for in the day that you eat of it you shall surely die.”

Those few words of instruction could not be more plain and simple, could they?

Yet, in the very next chapter, the “evil” that was conspicuously absent “in the beginning” had set in motion a chain of events that resulted in shame, fear, sadness, sorrow, and a host of curses being placed upon them including their ejection from their home, and the sentence of physical death for them and for each and every one of us born thereafter.

So, what went wrong?

The events described in Genesis 3 are God’s explanation of how our world has become what it is today, and what started it all.

Each moment in the story is loaded with meaning.  And what we see happening in the hearts and lives of both Eve and then Adam explains the direction and reasons why a perfect place became imperfect!

Very simply stated … the first family was tempted to start making up their own rules. What we find is the unfolding of a transition from just law-breaking to law-making! Once we start to question God’s Word, it is a short step to wind up denying His Word and believing Satan’s lies.

The devil is the enemy of God, of His Son Jesus Christ, and the Holy Spirit of God. And he is our enemy as well!

By Genesis 3:6 humanity has taken its seat quite firmly in what is God’s rightful place. What, then, will happen next? Their sin could not be undone. God alone has the right to be God!

And in His loving mercy, He provided a way for man to receive forgiveness of sin and be united with Him. He has preserved that information to this very day for all who will listen to His Word! Nothing can be added or taken away!

If I could have only one wish for God’s people … for all people of the world … it would be that more of us would come to fully appreciate the value of God’s Book … His Word … the Bible!

What the first couple failed to do … to trust that God knew what was best for them … is exactly what millions are still reenacting today.

God’s Scriptures will never leave one with some sort of a bewildered and uncertain answer to the issues of living!

God’s Book … says to us ‘this is the way you are to walk in life … and do not walk where I have told you not to walk.’

“And you He made alive, who were dead in trespasses and sins, in which you once walked according to the course of this world …” (Ephesians 2:1, 2)

“For we are His workmanship, created in Christ Jesus for good works, which God prepared beforehand that we should walk in them.” (Ephesians 2:10)

Satan is having his way … is deceiving so many … under the ruse that we can know what is best for us and we don’t need God or what is supposed to be His divine revealed Word!

Satan is working to convince us that God is the liar when in reality, that is the ultimate lie!

Only God is God! Man may try and usurp His authority, diminish His inspired Word … and at least seek to remove Him from the throne of their hearts!  But God is on His throne, and He will one day judge this world by the very Book we’ve just been describing.

“And if anyone hears My words and does not believe, I do not judge him; for I did not come to judge the world but to save the world. He who rejects Me, and does not receive My words, has that which judges him, the word that I have spoken will judge him in the last day.” (John 12:47-48)

Do you know Him? Do you want to know Him? The only place you will ever meet Him is in the pages of His revelation … the Bible!