Face To Face With A Storm … 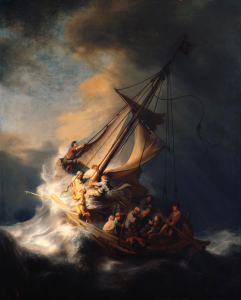 “And they came to Him and awoke Him, saying, ‘Master, Master, we are perishing!’ Then He arose and rebuked the wind and the raging of the water.  And they ceased, and there was a calm.  But He said to them, ‘Where is your faith?’” (Luke 8:24, 25)

The same sea that had just been so severe that their boat was taking on water … and these experienced fishermen by trade had been so terrified … was now quiet and only the gentle breeze was there to move them on to the other side of the lake!

Jesus had just said to them as they were getting into the boat, “let us cross over to the other side of the lake” (Luke 8:22).

Had these men simply forgotten His spoken words … or somehow overlooked them? Why didn’t they remember them when the storm came upon them?

The answers can be found in the truth that faith and service to God are much easier when everything is peaceful and calm … but it is a tremendous challenge to maintain in the face of the unexpected storms of this life that can rise up at any time!

With terror in their voices, they woke him screaming, “Master, Master, we are perishing!” (v. 24). The apostles, men experienced in fishing … familiar with the weather and the storms that could come up so quickly … and the real danger of being capsized and even drowning … would never forget the way Jesus looked at them.

No sooner had those words left his mouth than the wind was completely gone! The sudden hush of the howling was otherworldly. The waves immediately began to abate. Each disciple stood where he was, looking in amazement at the water and sky and each other.

Jesus had changed things … even as He can change the way we handle, deal with, and face the challenges of living in a sinful world!

Yes, there was a tone of rebuke in the words of Jesus and each of those men would not only feel the weight of His question but would probably carry the revealing question with them for the rest of their lives.

Each of these men must have wrestled with the answer to His question … didn’t they trust God?  They sure thought they did!  Even as we do!

But you see, each one of them would be faced with the truth that the faith they thought they had was not deep enough … great enough … strong enough … when the pressure was on!

Each of these men, spending as much time … witnessing as much as they had already seen must have felt not only chastened by Him … but humbled by Him as well!

And if we are not careful, we can fall back on only having faith in what we see … what we feel … the truths others have shared with us about their storms … none of which can save us.

Just try and imagine the scene … a raging storm on the lake one minute … peace and calmness following “His rebuke of the winds and the sea.”

No interest on my part in being on that boat at that moment with the exception of witnessing an awesome spectacle but this I do know … I need greater faith to face this life, my enemy, my own pride, and stubborn will! Do you?

“And they were afraid, and marveled, saying to one another, ‘Who can this be?  For He commands even the winds and water, and they obey Him!’” (Luke 8:25)

The men learned on this day to move past fear … and gravitate toward a deeper faith!

And it prepared them to weather other, even more, deadly kinds of storms that lay ahead of them.

Storms aren’t fun, either at sea or in real life. Yet we learn lessons through storms that we never would learn if life were always calm.

The Christian faith is not just to get us to heaven when we die. It teaches us how to live in the here and now, especially when life gets stormy.

Isn’t it so that when the storms of this life present themselves to us up close and personal … they almost always appear stronger to us than God’s Word. At least that is what Satan would have us believe.

It is crucial for us to remember that our perceptions can be deceptive. When circumstances strike fear into our hearts, the question we must ask ourselves is, where is our faith?

What God wants is for you to trust what he says over what you see, feel, or think.

Interesting thought to reflect on:  Jesus demonstrated His ability to rule over not just storms, but demons, disease, and even death. And these elements were all quick to obey.

But people too often hesitate or even refuse. Jesus Christ brings peace and calm to any storm-tossed life when a person makes the choice to accept and obey His Lordship over their very being … soul, spirit, mind, and body!

We need to face squarely the fact that sometimes Jesus doesn’t calm the storm. Sometimes the boat does sink, even if we’re trusting in Jesus. John the Baptist wasn’t delivered from prison; he lost his head. Peter was miraculously delivered from prison, but James was put to death (Acts 12:1-17).

So, what should we do if we trust in the Lord, but the boat sinks? The miracle doesn’t come.

The answer is, “We trust in the Lord Jesus as we go under!” That is not the end of our story.