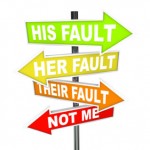 Have you ever been to a rodeo? One of the most amusing events that takes places in most rodeo events is the one where little cowboys try and catch little lambs or goats. If they catch one, it is theirs! If they don’t, well they leave the arena empty-handed. I’ve observed through the years that getting folks to admit their sins is like these little ones trying to catch the animal. They keep trying to slip away, wriggling, twisting, rolling and going through all sorts of contortions.

Confronted by God’s man, Nathan, King David, who is described by God Himself as “a man after My own heart”:

David simply yet profoundly comes face to face with himself as God sees him … he realizes just what he has done … he sees just how much he has disappointed God, others and even himself!

Most definitely, this is a great biblical example of the grace and the love of God! Among the several lessons the Parable of the Lost Son teaches us among several lessons is the awesome truth that our God is much more willing to forgive us than we are to be forgiven! But this great biblical example also highlights one other truth: the necessity of a person taking ownership of their sin! Are you listening to these words?

Righteous people will look to their gracious God and say “I was wrong!” Those who are not willing to accept responsibility for their sin will look up, look out, look around and point to anyone and everyone, even God as the cause of their mistake!

So … the questions for the day for all of us to ask and answer are these:

You Make The Call …

← The Eyes of the Lord
A Soldier Unarmed … →